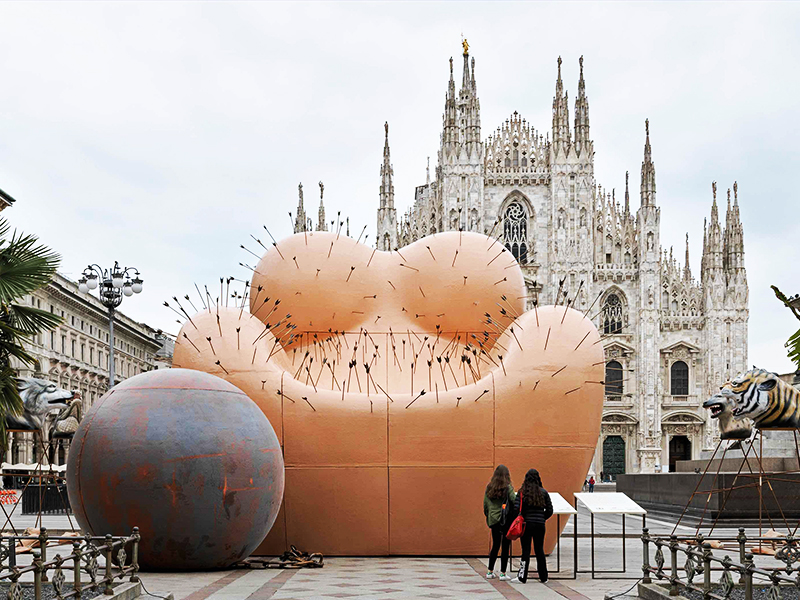 Great excitement in town: the 2019 Milan Furniture Fair was in Rho (opened April 13th and 14th), while the FuoriSalone offered to all thousand events which will define the success of the 58th edition of the fair, dedicated to the smart.

The city, divided into districts (among the most famous Brera, Savona-Tortona and Ventura), was full of works by startups, rising designers and little entrepreneur companies, which together gave life to the most important event in the city. The show area was 205.00 square meters with more than 2.350 exhibitors and 34% of them were foreigner brands which have showed their own products.

The entrance of the Italian building of Alex Chinneck seemed to be like a zip during the FuoriSalone. The Spazio Quattrocento in Opificio 31 (Tortona District), hosted the project where the architecture become art itself. During the Milan Furniture Week, Philippe Starck, designer of the innovative nature of Kartell, has created the chair called A.I., the first chair designed by artificial intelligence, Autodesk, and completely made of bio-plastic. Autodesk is able to summarize a set of features in an algorithm, which is related to the project of the chair. “Kartell, Autodesk and I” says Philippe Starck “we asked a question to an artificial intelligence: Artificial Intelligence, how do you make our body rest using the lesser quantity of material? Artificial Intelligence answered to us just with its intelligence, no culture, no memories, no influence.
Thanks to Kartell loves the planet, it was introduced the very first furniture line completely made of bio-plastic, a material which is 100% natural, provided by Bio.on, an Italian company which contributed to the fulfillment of a famous container-furniture, designed in 1967 by Anna Castelli Ferrieri and became an icon of Kartell.

The last kit of accessories made of cardboard, which is part of Nintendo Labo range, consists of a viewer for VR and five expansions.  Nintendo meets the VR, even if its approach is different from the one of Sony, Oculus, Htc and many other makers. The Japanese company announced in the last hours that Nintendo Labo – VR Kit for Nintendo Switch will be out soon, a new product which is part of the range of accessories in cardboard made for a console, and it uses the Switch screen as access door for VR. The stroke of genius is in the advanced modality, which allows to regulate the vibration frequency and to use the infrared sensor at the far end of JoyCon to drive the little car from a first-person perspective, even in the dark, or to use it making the little car follow the reflective surfaces or our hand.

At Messina Pavillon 2 of the Fabbrica del Vapore of Milan, which joined this year the FuoriSalone in Isola Design District, it was possible to take part to the Design No Brand, an event where creativity, style research and new materials blend together with the basics of circular economy, social inclusion and sustainability, organized by Milano Makers, Giacimenti Urbani, Mediterranea and T12-lab.

News about eco-design and furniture are all created with compost and recycling material: bio-plastic Krill Design lamp, realized thanks to 3D prints by Green Evo, armchairs made for music therapy covered by AppleSkin, a vegetal material extracted by wastes of apple, jewelry realized with recycled copper and aluminum by El Taller.
The project was related thanks to an awareness: the respect for human beings and the natural environment, which is a precious and useful resource to react to contemporary social needs, not only to marketing duties.

On April 9th, Dyson has introduced Lightcycle: an interactive lamp, used via App or Smartphone, which saves ages and user habits, it is smart and it can show always the right light way during the day. The style is typical of Dyson and the producer promises that the light bulb will last up to 60 years. The lamp can be used also through Dyson App, where it is possible to measure the environmental state, to better regulate the light of the light bulb. It is important to highlight that there are some incompatibilities with Siri and Alexa.

This week not only involved furniture and design accessories, but also cars and architecture, which are blended together: for this reason, the presence of car makers was very high, i.e. with the new Range Rover Evoque, the new Lamborghini Huracán EVO Spyder or the new concept of Alfa Romeo Tonale. But there were also who wanted to bound its brand to furniture or structures, like Bentley with the décor, Bugatti with the chairs, while Citroën brings at the Design Week the Maison Citroën Centenary Edition, also with a dedicated chair. The area was the one in Via Tortona, with Peugeot Design Lab, Lexus with its Design Award (Superstudio Più), Hyundai Style Set Free (Opificio 31).
Moreover, Italdesign, which in its area exhibited the new coffee machine for Espresso Faema E71E, painted like the car body of the DaVinci concept, Okamura Finora with its office chair, Oxolodge Oxology Glitch table (realized with a ten-years petrified tree), and Esasit, a series of hexagonal and combinable chairs. In addition, Ombra, a carbon-fiber massaging chaise-longue developed in collaboration with Alcantara.

For the following days there is a news: the open of the first Italian Design Museum at the Triennale Milano, a permanent area where there are objects which made the history of design and architecture from 1946 to 1981.

Design means project. To design means, in latin, throw forward.
Design is awareness: it means be aware of the present and imagine the future.

Next post
https://errecompany.org/wp-content/uploads/2019/04/Auto_Shanghai_2019_ARTICOLO.jpg
This site is registered on wpml.org as a development site.